The Luxury of Boredom: What is Time, Anyway? (O'Keefe) 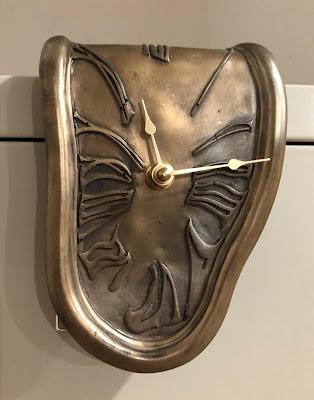 If you’re lucky enough to be healthy and employed during this pandemic, chances are you still suffer from a lesser-though-still-mighty affliction that is also a luxury: boredom. I’m sorry. I’m very good at self-entertainment via reading and writing, but I’m really getting bored on weeknights and especially on weekends. Despite the herculean efforts of Netflix, Saturday has become the cruelest night.

Ironically, all this crushing amount of time spent glancing at clocks has led me to an existential question: What is time, anyway? I haven’t pondered the nature of time this much since my college days when I flirted with becoming a philosophy major and took a course called “Time and the Human Condition.” Much of the course did not fly by, but I remember being fascinated when we studied the history of standardized time.

I had no idea that “Eastern standard time” in the United States, which governed my life back then, only became an official designation in the late 1800s. That was when the growing railroad system needed greater accuracy in its schedule, so international bodies began to map the world’s time much like its space. To become more efficient, the railroads needed local times to be standardized, and the result was 24 worldwide time zones. In other words, exactly “what time it is” on a clock is an agreed-upon social construct.

A few years later I moved to the Central time zone for graduate school. When I picked up a slim volume titled The History of Time: A Very Short Introduction by Leofranc Holford-Strevens, my mind expanded further. Holford-Strevens reveals that not only is our daily 24-hour time system a convention, but that convention is based on another convention known as the 60-minute hour. As recently as the late 1700s, he explains, the “decree establishing the French revolutionary calendar envisaged a decimal division of the day into ten hours, each of 100 minutes, themselves each of 100 seconds, to take effect on September 22, 1794. Although the scheme would prove impractical, ten-hour clockfaces were made.”

But why stop with relativizing 24-hour days and 60-minute hours? Holford-Strevens adds that even our seven-day week is a mere convention. In fact, in 1929 the Soviet Union tried to change the seven-day week to a “five-day cycle from Monday to Friday.” In that plan, “each of the five days was a rest-day for one-fifth of the population, every citizen receiving a colored slip corresponding to his or her day off.” Alas, it too became hard to sustain, and in 1940 “Stalin restored the seven-day week with Sunday rest.”

Which brings me back to today (and the Eastern time zone), another pandemic day that makes Waiting for Godot seem like an action thriller.  We’ve all seen the internet memes about every day’s sameness: there is now only day and night, coffee time and wine time, Groundhog Day forever. And yes, the moderate-to-severe boredom is often palpable.

But maybe all this time on our hands and in our face can inspire us to re-evaluate the nature of time, how we spend it, how we save it, and even—perhaps especially—how we divide it. Imagine a twenty-second minute, a fifty-minute hour, a forty-hour day, or a four-day week. How might such world-tinkering change our lives?

Vincent O’Keefe is a writer and former stay-at-home father with a PhD in American literature. His writing has appeared at The New York Times, The Washington Post, Time, and Parents, among other venues. He is also a columnist at City Dads Group. Visit him at VincentOKeefe.com.
Posted by susan grimm at 8:00 AM