At First, I Was Calm (Kincer) 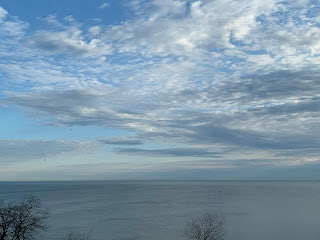 But then I went to Giant Eagle on W. 117th Street, at the edge of America’s second poorest city, where a woman wore a mask, a man filled an entire cart with gallons of milk, and lines stretched to the back of the store so your frozen food thawed by the time you paid for it.

I breathed with the concentration of a woman in labor, counting in 2, 3, 4, out 2, 3, 4, 5, 6, until I was back in my body and not somewhere else, without food, job, home, electricity, heat, like millions even before, even without, this pandemic.

In the bullseye of this pandemic, my 81-year-old, one-breasted, three-cancer surviving, still-smoking mother ordered two carryout Easter dinners from Susie’s Restaurant in Vermilion. At home, we opened warm Styrofoam and scooped cheesy potatoes, yams, green bean casserole. We cut ham slices in half to save for later. We split a piece of banana cream pie.

Over dinner, she said she heard on NPR that we’re headed for a worldwide Depression like in 1929. She said my son will have to learn to save money, cook at home, live frugally. Unspoken was the vindication of being right all along to live so carefully, to save everything because you never know, you might need it. I did not tell her that I threw out mismatched socks last year and wished for them now to make ear loops for bandana masks to wear at the grocery. She told me that young people will have to learn that they can’t have everything they want, and then she went back to describing the ways the world is doomed. No matter what I said, I could not stop the train of her thoughts or turn it around.

Days later, she circled back to the worldwide Depression and asked if I’d talked to my son yet about saving more. I felt my heart speed up, my head lighten, and I wondered if this is what a panic attack feels like. She kept going, gaining speed, while I was changing lanes on a highway and wondering if I should pull over. I interrupted her and said I was not the right person for this conversation. Perhaps she could call a friend to talk about the news? Forgive me.

There’s no TV, no broadcast news except the governor’s measured briefings, in this rented condo on Lake Erie where I’m sheltering, where all the chairs face north. I watch the lake and the sky and the waves. I catch sight of the familiar beat of a blue heron’s wings, the white head and tail of a bald eagle. I meditate, read, write, cook, walk. Somewhere deep below the rolling white-capped waves on the windiest of days, I imagine the water is calm.

Laurie Kincer runs the William N. Skirball Writers’ Center at the South Euclid-Lyndhurst Branch of Cuyahoga County Public Library. She loves her job, creating free public writing programs, hosting author events, and meeting avid readers and writers every day. She wrote this on Day #54 of the library closure, not that she’s counting or anything.
Posted by susan grimm at 8:08 AM