Looking for a Better Day (Grimm) 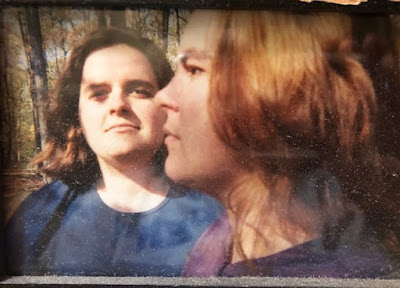 I’m thinking about my daughter Susan’s birthday, which is today, which I will miss, as I missed her sister’s in April.

Val’s birth was a surprise and an emergency (two weeks early). Sue’s was more sedate, and even planned, since it was a cesarean. I chose the earliest date possible, of course, and was glad that it was after the big family Memorial Day party at my aunt’s house. I went into the hospital the night before and sat up late in my hospital bed, reading a library book on continental drift, and then went to sleep dreaming of the continents sliding about on the globe like pancakes on a plate.

The next morning, I went under the knife, as people like to say, and emerged from a cloud of anesthesia with a second daughter. As I’ve told her, I was sure she was going to be a boy, because of some weird belief in symmetry: I had a girl, and now, for balance, I’d have a boy.

Aside from gender, they did balance each other in many ways. Val was born with a mop of dark hair, Sue with nothing visible on top, and when it started to grow in, it was blonde. Val was reserved and liked to keep her own counsel. Sue was a chatterbox even before she could do words. Val was a sulker, Sue a whiner. It amazed me that they had different personalities from the start – somehow I’d had the impression that babies were born as blank slates, that their characters and selves would develop and accumulate as they got older.

The year she was born was also the year of Watergate and the terrorist attack at the Olympics. More than 5000 people died in earthquakes in Iraq, Nicaragua, and Turkey. The Vietnam War was still going on: the US bombed Hanoi in April, and ended the year by bombing North Vietnam on Christmas day. Awful things were happening, as they are now, some impersonal, like the coronavirus; others the result of hatred, malice, politics.

But there was the balance. Shirley Chisholm, announced that she was running for president, the first black candidate for a major party's nomination, and the first woman to participate in a national presidential debate. California abolished the death penalty. Seventy nations agreed to ban biological warfare. DNA research began. People fell in love. Babies were born.

I hope my daughter will forgive me for sending her a birthday message that is contextualized and edged with remembered and present sorrow. I want to say though that the happiness of her birth, for any baby’s birth, is what makes us want to keep on, to work at making a better day and a better year. When our children open their eyes for the first time, it starts in us a fierce desire to make their way smooth, to re-envision the world once again, as better, cleaner, more joyful, and every year that our children live, we have that same hope, sending it into the future along with them.

Mary Grimm has had two books published, Left to Themselves (novel) and Stealing Time (story collection). Currently, she is working on a novel set in 1930s Cleveland. She teaches fiction writing at Case Western Reserve University.
Posted by susan grimm at 8:00 AM