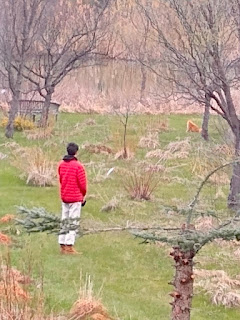 I wonder if I know any parents whose fears for themselves this spring, despite age and health factors, outweigh their fears for their children. I’m not talking about young children, whose vulnerability—for a time—we are able to push aside with relief, blithely thinking they might not be susceptible. But adult children, trying to make their way in the world, hoping to protect newly hatched careers and tenuous relationships, they give us pause.

My husband Jerry and I are in our sixties and fifties, respectively, and so I could worry a great deal about our near future, and I do, of course, but not like my concern for our children, some of whom work in health care, all of whom are far away. In March, it’s thoughts of our youngest son, in New York—ground zero once again—keeping me up nights. A freelance producer in Brooklyn, he’s the new bass player for a band whose music fits into a genre I’ve never heard of: Post-Punk Experimental Noise. After the opening show of their winter tour, back in the giddy days of November, we came away with two impressions. 1) They’re incredibly talented. 2) That was loud.

At the start of the quarantine, I encourage him to come home to Vermont and isolate here. He could hang out in his old room, do his laundry. Hell, I could do his laundry! There’s space to walk around outside. I could cook for him! He says he’ll think about it in a voice that’s already considering what he’ll do when we’re off the phone.

Our son is responsible. He’s in quarantine, hardly going out, wearing a mask. By mid-March, though, he sounds increasingly stressed and joyless on the phone. More than anything, he’s disappointed about the band’s cancelled tour (South by Southwest, among other stops), and inability to work on new material.

“We lost our rehearsal space,” he tells me. “Even if we could get in, we’d have to spend half our time disinfecting every surface.”

“That makes no sense.”

“Maybe we could come up there? You’d talked about that.”

“We’ve all been quarantined for ages.”

“Could we rehearse in the barn? Or maybe the basement?”

The band is four young men, one of whom is capable of wearing five-inch heels and doing gymnastic moves while singing at the front of a post-punk experimental noise band. (Exceptional talent. Very loud.)

They arrive in April. Pull up in the van, don masks, then wave across the driveway to where I’m standing, hugging hands stuffed in my pockets. They unload equipment, then make their way around the house to the door that only they will use.

The basement has a finished part and an unfinished part, and that is where they exist in their time with us. Isolated, they live down there, rehearse down there, eat down there. We call “hello” up and down the stairs. Jerry and I leave food for them on the buffet (aptly named). When they come up to get coffee or load paper plates with scrambled eggs or salad or bagels, we stand back and talk to them from across the kitchen, masks muffling our words. I hate this. I hate that my son is not allowed in his kitchen. I hate not hugging him, not carelessly standing beside him for no better reason than both of us reaching for the milk at the same moment.

I, meanwhile, am making masks. The Vermont Teddy Bear Factory has closed, but is cutting fabric and putting together kits for people to make masks for health care workers. In my office, two floors above the basement, I’m sewing when the music starts. It feels as if the whole shaking house might break free from its moorings and float away down Dorset Street. I feel the music in my skin, my fillings, my throat. I’ve been worried about the pets, but I have underestimated them. The cat simply slopes out of the house; the dog lies on the floor and embraces the vibration like a spa treatment.

All the band members live in Brooklyn, but none is from there. When they take breaks, they wander our yard, breathe the spring air (when they’re not smoking), tickle the dog, flirt with the cat. I watch them enjoy being here and, with new resolve, I don’t hate this so much anymore.

They eat dinner at a patio table; we eat up on a porch twenty feet away from them. We talk about the virus, politics, music, art. We talk about nothing sometimes. After dinner the band disperses to the fire pit I’d set up ages ago but had yet to use. Every night, they sit around a small fire, talking and  laughing. They are safe. They are here—right here. I love this.

For a time, before they return to New York, music, meals, and walks form the disjointed interactions of our sad-not-sad habit. Sealed in the basement, their music becomes our secret. Outside, you can barely discern rippling changes in the air, an inexplicable rhythm emanating from somewhere beneath your feet. Inside, it is Very Loud. But also, unexpectedly soothing. This is physical connection. It is a trembling statement about caution and intimacy and a combination of anger and joy that might make you want to put on five-inch heels and shout into a microphone while you do a backbend so low, your hair brushes the floor. I don’t really know how that feels. I just know that experiencing it, even from the remove of two floors above the basement, leaves me feeling furiously, obstinately alive.


Shelagh Connor Shapiro’s stories have appeared in North Dakota Quarterly, The Baltimore Review, Gulf Stream and others. She was nominated for a Pushcart Prize in 2014, the same year she published a novel, Shape of the Sky (Wind Ridge Press). She has an MFA from VCFA and hosts a weekly radio show, Write the Book: Conversations on Craft.
Posted by susan grimm at 8:03 AM