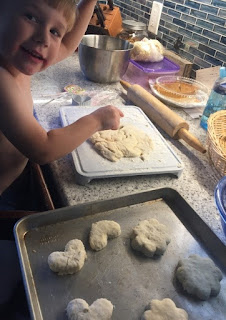 Mondays, my grandson and I kiss the parents goodbye and settle in for a full day of doing whatever we want. Wear pajamas all day, make play dough or papier-mâché, turn a box into a pirate ship, whatever. We are serious foodies, so we think nothing of making pumpkin pancakes or flower and heart-shaped scones for breakfast.

Outside, we chalk stepping stones and pretend the hose is a waterfall.

My grandson’s house is near a park where we pretend the swings are rockets or we dig for bugs in the sandbox. He’s shy, so meeting strangers at the park is a big deal. One day I overheard him tell one of the boys, as they jammed sticks into a new hole, that if they could dig and dig and dig, eventually they would hit magma and when it came out it would be lava.
We had just read that in a book about digging a hole to the other side of the world. We’ve read most of the novels by E.B. White and Roald Dahl, and are now picking our way through The Chronicles of Narnia. C.S. Lewis’s ornate, talky style is too abstract sometimes, and then we’ll snap the book shut and my grandson will shout, "Polly! Quick! Put on your ring!" and we’ll jump into another world with great dangers we make up ourselves.

The Covid-19 sea changes came fast. First one parent working from home, then the other, then no more Grandma Days for an unknown number of Mondays.

It’s a weird catastrophe, very science fiction, but I confess I’ve been expecting a crisis of some kind, and likely you have, too. As the director of Lit Youngstown, a literary arts nonprofit, last year I selected a series of books for discussion on humankind and the natural world. We read Aimee Nezhukumatathil’s poetry collection Oceanic, novels The Overstory by Richard Powers and Unsheltered by Barbara Kingsolver, the short story collection For a Little While by Rick Bass, and others.

Before the pandemic hit, we read The Uninhabitable Earth by David Wallace-Wells. I knew some of the science, though not in this detail. But as you know, these predictions, maybe with less precision but no less moral clarity, have been roaring at us since before my own kids were the age of my grandson.

Of course, that systems collapse was running in the background during the recent decades’ dismantling of our institutions and quality of life. Covid-19 is like a red stain, showing the rotten spots in our social and economic structures. Millions of kids and adults are living on emergency food, so we can’t just prop up the free market shops and stores. Millions of workers are struggling to pay for inadequate health insurance tied to their employment, so we can’t just prop up the local and health care channels. Millions of people are just scraping by, so an interruption of income is catastrophic. Our supply chains are sclerotic and fragile. You know. How little we prepared for any apocalypse, however much we should have. (The Obama administration had a pandemic response team, but these other factors were still in place.)

So I was sort of mentally prepared for an environmental collapse of some kind, keeping notes on which of my friends and neighbors are well stocked with food. Joking, but it’s hard to plan, right? And it looks inevitable. I have heard Covid-19 described as a trial run.

If predictions play out, by the time he is my age, Ohio will be flooded with climate refugees from other parts of the U.S. There will be more CO2 and less oxygen in the air, making cognition more difficult and food less nutritious. The wild animals he knows now will largely be extinct, including many that crisscross his backyard—already, by weight, 96% of fauna on Earth are domestic animals and us. And invasive plants, animals, and microbes will make the life of his generation harrowing.

Although we began to back ourselves toward the precipice at the dawn of the industrial revolution (not that my ancestors, the Europeans, were ever much good at stewardship), most of the damage has been done in my lifetime, the vast majority in the lifetime of my kids. I turned ten the year of the first Earth Day, and I was all in. My dad told me I convinced him to give up his aerosol deodorant to save the ozone layer. But between then and now we sure did drop the ball.

My grandson and I have found a few ways to stay in touch in the absence of Grandma Days. We’ve chatted by Facetime.
I mail him a letter every day. Some are silly stories I make up so he can write words or numbers in the blanks. Some continue our running sagas, like The Pineapple Eater, a shape-shifting character who steals from pineapple-loving children, but usually has a change of heart. I sent him lyrics of “What a Wonderful World” and “Knees Up Mother Brown.”

He sent me a letter, too, with this story.

Once upon a time, a predator ate a mouse. It died. Kylo Ren used the force for it to stay dead. It got up one day and went to his mommy’s house. They played UNO again and were safe at last.

He ended with Love you Grandma, love you this much: sixty-one hundred fifty.

I guess the best I can do is love him and try to contribute to his childhood happiness. His parents are instilling in him a sense of curiosity, problem-solving and resilience, and also security, and those will serve him well.

And aren’t you a little thrilled by how much the vast majority of us seem to be pulling together? Maybe when we come out of this, we’ll have the strength to build the social structure we need to face the next decades, do the best we can. I hope so. Meanwhile, I will not lose sight of the incredible blessings of my life, even as I carry the fear like a meal. My grandson knows that to face predators and evil, the thing we need is love.


Karen Schubert is author of the forthcoming poetry collection The Compost Reader (Accents Publishing) and five chapbooks, most recently Dear Youngstown (NightBallet Press). Her awards include a Wick Poetry Center chapbook prize, an Ohio Arts Council Individual Excellence Award, and residencies at the Vermont Studio Center and Headlands Center for the Arts. 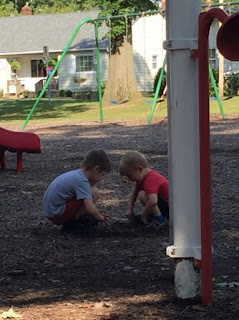