As I prepare my syllabus for my summer class, I’m wondering how the pandemic experience will help my students understand Thomas Kuhn’s paradigm shifts, the theoretical basis I rely upon to explain how entrenched big ideas and systems inevitably change.

For nineteen- and twenty-year-olds, the idea of paradigms is not easy to grasp. Yet, the idea is an important one for the development of critical thinking because it highlights how hidden assumptions at the core of our basic beliefs are what make people resist change in systems and big ideas.

But in each of these cases, the eventual acceptance of a new paradigm hinged upon the adoption of a new set of underlying assumptions that challenged old ones and had ripple effects not just in the scientific world, but in political and cultural realms as well.

Enter Covid-19—the first pandemic in over 100 years. In a slower motion version of 9/11, when we watched planes fly into the Twin Towers and knew that the world would never be the same again, today we know that our response to the coronavirus will result in a paradigm shift as well even though we know it will take a while to figure out exactly what our new life will look like. We already know that avoiding contagion will be a basic assumption in our new world, but what other assumptions will be present but unspoken about our new culture that will affect how we work, play, create, and love?

Those who are thinking that once we find a vaccine for the virus that our world will return to the way it was prior to 2020 are ignoring history. The world has never re-used an old paradigm and history shows us that we can’t operate with the right foot in one and the left in another, half believing that the earth is at the center of it all while half accepting the sun is central.  And we can’t really go backward either—we might swear off Facebook for a while, but we can’t ignore the paradigm that the world transmits messages through social media. And so, vaccine or not, and as much as we may want to, we can’t go back to a pre-pandemic world.

Getting back to my summer class on the history of the science and perceptions of mental illness, I can’t help but wonder if, having experienced this pandemic, my students will grasp the concept of Kuhn’s paradigm shifts more easily than past classes have. And I also wonder how they will feel about the idea that people eventually accept new paradigms because they solve problems better than the old one.

Barbara Burgess-Van Aken, an early modernist specializing in Shakespeare and women writers, teaches undergraduates at Case Western Reserve University. While waiting to see what the post-pandemic paradigm looks like, she is refreshing her Italian, trying to write daily, taking long walks, and playing the piano.
Posted by susan grimm at 8:00 AM No comments: 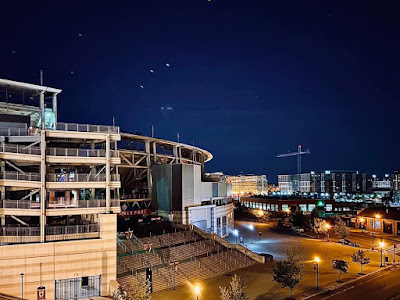 It’s a bit unnerving in my part of DC right now.

The streets are empty in a way that I’ve never seen. Even at the height of the coronavirus lockdown, there were always cars buzzing by, folks out walking dogs, drunk people singing sports things as they walk back to the metro. But right now, the streets are totally empty. The only movement I’ve seen all night turned out to be a single police officer, pacing silently around Nationals Stadium.

Where cars and people are absent, helicopters are filling the silence. They’ve been circling nonstop for the past hour or two: insanely loud when they’re overhead, fading out as they circle away on whatever routes they’re flying. It makes me feel vaguely like I should pull the blinds and stay away from the windows. (Thanks for that, Hollywood.)


Almost everything seems to be happening at a distance -- just around the corner or down the block... sirens sounding off every 20-30 minutes, robotic megaphone announcements and unintelligible yells in the distance, flashing lights barely visible near the metro station on the corner...

Guys, it’s super-weird is all I’m saying. Not a fan. I never in a bajillion years thought I’d say this, but give me back my DC traffic and drunk sports bros and incongruous pizza place techno music.
The only time DC should be this creepy-quiet is when the city gets a few millimeters of snow and everyone stays inside in case the low coefficient of friction is contagious.

Jacqueline Collins lives in Washington, DC, where she works as a technical writer and program analyst. She has published extensively in the fields of Federal Technical Regulatory Documentation That Only SMEs Will Ever Read and SaaS Online Help Websites That No One In The World Will Ever Visit.
Posted by susan grimm at 8:00 AM No comments: 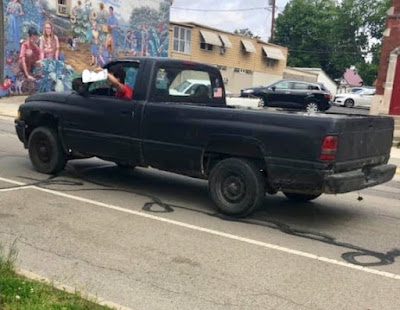 “Choose the least important day of your life. It will be important enough.”
--Thornton Wilder, Our Town

For the most part, social isolation has been respite and retreat from the oh-so-urgent endeavors that consumed much of my life before Gov. Mike DeWine, Ohio Department of Health Director Dr. Amy Acton, and our must-be-obeyed daughter ordered us to stay at home.

Eighty-some successive, quiet, uneventful days leave me hard pressed to recall exactly what I did with the hours I have now for Netflix and cooking. I savor this sabbath time, and, at some level, dread the one fine, Covid-19-free day when outside demands return—if such a fine day ever comes.

For a little while last Friday, I glimpsed re-entry darkly, through the glass of self-isolation, and, for the first time, could see myself stepping out there again.

I was making lunch when my friend Joy phoned to say she had delivered some items to the local homeless shelter, where she serves on the board, and saw a young black man walking down the street with a Black Lives Matter sign. On impulse, she parked her car at the UDF and approached him to ask if she might walk with him for a while. He welcomed her company, and as they walked, she discovered that she had taught some of his cousins. This is a small town; connections abound.

They’d gone only a short way when a white guy slowed down his pickup truck and began shouting at them, the upshot being that they were racists. The pickup driver made the block, shouted some more, then parked and took his screed to the middle of the street, where he was soon joined by another white man, who let fly with his own verbal abuse of the young black man and white grandmother.

The incident ended when Joy took out her phone to make pictures. Pickup guy made a beeline for his truck, that bore no plates, front or rear, and drove off while sticking a license plate out the window (see above photo), his parting words, “I’m eighteen, and I’ll do whatever I want.”

Once she returned to her car, Joy called to ask how to post the picture on a closed Facebook group we belong to. She was still a little rattled, so I invited her over to debrief and have a mask- and distancing-compliant lunch on my deck, distinguishing her as the first non-family visitor to join us for a meal in going on three months.

All in all, Friday, May 29, 2020, in Wilmington, Ohio, was what I think Thornton Wilder meant by a least important, yet important enough day. American Covid-19 deaths had surpassed 100,000, peaceful demonstrations and violent riots overwhelmed our cities in the wake of George Floyd’s murder by Minneapolis police, SpaceX Dragon was still earthbound, Joy acted on her convictions, and Chuck and I celebrated our wedding anniversary.

In my first “Raw Data” blog, I shared a favorite recipe (which, incidentally, was what I served Joy at lunch on the deck). This time, I offer the May 24 Zoom stage reading of Wilder’s Our Town that shook me out of my social-distancing reverie and re-oriented me to the extraordinariness of every ordinary day.

Produced to benefit a private school for special needs students in the Los Angeles area, the reading features a professional cast, including John Michael Higgins as the Stage Manager; Annie Potts as Mrs. Gibbs; and Amy Brenneman as Mrs. Webb. Here’s a link to the recorded live performance:

Wilder wrote, “There are some things we know, but we don’t take them out and look at them very often.” I’m trying to work on that.

Mary Thomas Watts lives in Wilmington, Ohio. She is a veteran journalist and adult theological educator. She and her friend Joy are founding members of the Clinton County Alliance for Compassion and Truth, organized following the 2016 election.
Posted by susan grimm at 8:08 AM No comments:

At 8pm strangers howl from their homes.
We can’t see them, and, because our valley

bends sound, we can’t trust where their voices come
from. In this way, their cries are ghosts, are fog

from our lost sea. Come morning the dew will
weigh down the grass in the field between us.

Will brighten the forget-me-nots, and red
tongues of camellias that cover the bush

in my dead mother’s yard. I will hide a chain
of riddles written on notes for my sons

all over our property. At the stone-
jawed creek, in the hollow of the pear tree

split by lightning. At the edge of the woods
where they meet us with their darkness. I will

try to decipher what this all means. This
empty valley we’ve stepped into waiting

for sound (bird song, or howl) to answer back
even though we have no way to see it.

Iris Jamahl Dunkle's Charmian Kittredge London: Trailblazer, Author, Adventurer is forthcoming from the University of Oklahoma Press. Her poetry collection West : Fire : Archive is forthcoming from Mountain/ West Poetry Series. Previous books include Interrupted Geographies, Gold Passage, and There's a Ghost in this Machine of Air.
Posted by susan grimm at 8:32 AM 1 comment: